Hardening the Quads for the VT100 Hills

I remember running the VT100 in 2009.  I was with the lead pack around mile 40 going up a fairly long steep hill.  About midway up a young runner went flying by, strong as ever.  Wow, we thought.  He’s got this race.  Never saw him again… until just before Camp 10 Bear the second time around.  There’s that long jeep trail going down which seems like for miles.  About midway on that downhill we saw that runner struggling and walking on the downhill.  As we went by, he said he did lot of hill work to prepare but didn’t do enough downhill training and blew his quads on the downhill running, thus losing his chance of winning the VT100.   I’m amazed how many runners not only at the VT100 but other hilly 100 mile races where runners are walking the downhills in the later stages of the race when they should be taking advantage of gravity and running the downhills.

With that said, prepare now for not only the uphills but even more important, the downhills.  The hills are relentless at the VT100 and those dirt roads in the summer are as hard as concrete.

Biomechanically speaking, hill running…
1) Improves your stride length (from uphill running) and your stride frequency (from downhill running).
2) Increases your ankle flexion that enables you to “pop” off the ground more quickly, so that you can spend less time on the ground and more time in the air.
3) Teaches you how to run relaxed.

HOW TO RUN HILLS:

The number of intervals will depend on your level of training, maybe start with 2 or 3 repeats and increase each week. After you reach the top don’t stop short, but instead “run-through” the finish line at the top. Then catch your breath and immediately run back downhill at a similar effort. Wait until your heart rate and breathing rate slows down some, approximately one to two minutes. Then repeat.  Run the hill at a moderately hard effort, but at pace that you could hold for the duration of the climb and then run the same kind of effort down. 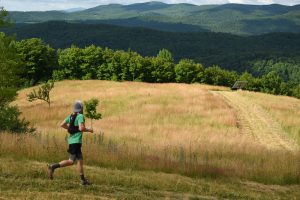 Be careful with downhill running as it is an eccentric contraction meaning that the muscle is lengthening while it shortens, truly playing a tug-of-war with itself.  And downhill running can be very injurious to your knees, so try not to “pound” the road on the downhill but instead run smooth and fast with minimal braking.  If running on a hard surface, a more cushioned shoe will help take some of the impact.  And make sure you warm up well before and cool down after.

Remember: Hills Are Your Friend!!

HAVE FUN AND SEE YOU AT THE FINISH!!